This game is available for free on my website. However, please consider supporting me by purchasing this game.

NAIVE is a short, introspective freeform role-playing game for two players with no game master. It is expected to last around two hours, including a few workshops and a debriefing. No costumes or props are needed. A device on which to play a piece of music used as a transition in and out of game is needed. Optional material includes a recording device, in case the participants would be willing to upload their session on the dedicated platform.

A person volunteers for a program to train an android’s AI. During their first session, the android asks the volunteer about sex. In this game, the android’s candidness serves to question the player’s perception of sexuality: it is a journey through representations of sex, desire, and the human.

Although it is mainly a dialogue, sex might be performed. Ars amandi would then be used as a mechanic.

The volunteer character is built through a hot seat, monitored by the android player: it helps establishing a succinct identity for the character, but mostly focuses on which state of mind they are in at the beginning of the game. A workshop, monitored by the volunteer player, is designed to help the android player act and talk the most neutrally as possible: it also aims at creating a feeling of “uncanny valley”, a feeling of uneasiness that occurs when a robot look disturbingly like a human, for the volunteer player to interact with the android player. The game design also encourages both participants to share their feelings and expectations prior to the game, as part of the intention to foster respectful discussions about sexuality.

A word cloud is provided based on actual game sessions (developed through beta-testing, and later by implementing elements from recordings uploaded on the platform) to help direct the android’s questions. The protocol is by no means binding: it is merely here to provide guidelines or ideas to help the android player. It aims to favor associations of idea and support a naive approach, to try to cancel out the android player’s own preconceptions.

The android’s goal is to learn what sexuality is to human beings: ultimately, its assimilation of human features could lead it to question whether it can, itself, have sex. This questioning broadens the perspective of the game, diving into the perceived limits of the notion of humanity.

The Internet Archive is used to allow those who played it to upload the recordings of their sessions. The aim is to create a virtual library on which diverse visions about sexuality can be found, in the form of a myriad of subjective conceptions. It contributes to sex education and a positive approach to sexuality by deconstructing prevailing discourses.

This freeform larp for four to twelve players stages a training program of advanced artificial intelligence, represented by androids (players). Volunteers, having agreed to participate in the program, are asked - without having prepared for it - by the android facing them what sex is. After twenty to thirty minutes (depending on the number of participants), the session ends and the volunteer goes to the next android. The android starts the interview with the next person, keeping in mind what he learned with its previous interlocutor.

In this game, the naivety of the android is used to question the perceptions that the player-volonteer has of sexuality: it is a journey through representations of sex, desire, and humanity.

The role of android, although it is no less interesting than that of volunteer, is a "play-to-lift" role, playing to support and encourage. Thus, it is a predominantly intellectual game, which provides little space for emotional or introspective play.

NAIVE is a three-to-four hour freeform, including a few workshops and a debriefing. A GM-character is in charge of the game structure (timing, launch the start/end music, etc.).

There are two scenarios for people who play volunteers:

Players who play androids must familiarize themselves beforehand with the Protocol (common with the two-player version of the GN) which will help them to direct their questions. They are plainly dressed in a light color (no black, navy blue, brown). They can, if they wish, wear a simple mask (i.e. white cardboard mask) or sunglasses to reinforce the artificial side.

To run it, you need:

In order to download this larp you must purchase it at or above the minimum price of 1.00€ EUR. You will get access to the following files: 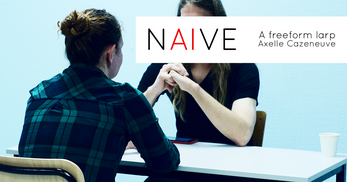