Presence is a game about long-distance relationships. It’s a game about love, separation, and the continuous presence of the significant other. It’s about missing someone you used to share a life with, about not being able to touch them or see them with your naked eye, about their ghostly company that lies in all things shared. It could also be a larp about how the ache somehow grows dull after a while, about how the connexion finally fades, about the deep sadness that arises as you get used to missing them. But it would have to be a much, much longer larp.

This is a game few might want to play, as reading it has proven painful to many. Should it never be played, however, this larp would still exist as a statement and, as the author believes, as an attempt at making art out of an extremely ordinary, yet always harrowing, life event.

Presence is a two-player game, without game master. The players should be alone through the whole process, and preferably not interact (at least physically) with other people for the duration of the game. The whole game, including the workshops, lasts about 24 hours; the next morning should be reserved for debriefing thoroughly, and if possible, the players might also arrange for a more social activity in the afternoon after the game, in order to chase the sadness away.

There is no recommended level of prior intimacy between the players, although it is expected, as the game is entirely run by the players, that they have some basic level of mutual familiarity and trust. The nature and intensity of commitment between them, as well as how comfortable they are with each other, is likely to affect the immersion greatly; bleed-out is probably inevitable in the event that the game would go as planned, and the players should be aware that it could occur before engaging in the game. During the game, opting out is possible at any moment by texting or saying out loud the safeword “RED”, according to the color scale used in one of the main workshops which will be presented below. Presence is not a dramatic game; it relies on slow-play, on the quiet building of an atmosphere, on introspection. It is a heavy game, in which each minute feels twice as long. It can grow uncomfortable, lonely, restless or depressing; it is, in fact, how it is meant to be.

Ideally, the choice of location is dependent on the basic scenario chosen by the players; it can be one of the players’ apartment, a small cottage, a hotel room, etc. It should, if possible, contain the following: a kitchen or kitchen corner; a bedroom; a main room (living room, kitchen, etc.). At least two rooms are preferable, although it could be played in a studio apartment if no other option is available. No other person should be on location during the game. Pets living there could remain, although they could set a bridge between the two different layers of reality of the characters, by equally acknowledging the presence of both humans… Additionally, they could be too comforting a presence for the game to go as dark as it may - however, it can be a lot of stress for our little friends to be moved to a different place, so act according to what seems best fit to your needs and those of your animal roommates.

The characters are defined through several elements, some determined by each player in advance, some workshopped. The base scenario is that the characters had been living together for a while, and that due to a reason independent from the relationship, one of them at least has to move to another far-away location (preferentially not that far, as time zones should be close in order to support immersion). The game can be played with at least two different settings: one in which both characters move, and thus feel estrangement and alienation each in their own way; one in which only one of them moves away, thus experiencing isolation while their partner experiences emptiness and loss. This should be discussed in advance, and impact the setting as much as possible: for example, if only one character moves away, the game should be played in an environment that is familiar to the other character’s player (their own apartment for example).

In order to download this larp you must purchase it at or above the minimum price of 1.00€ EUR. You will get access to the following files: 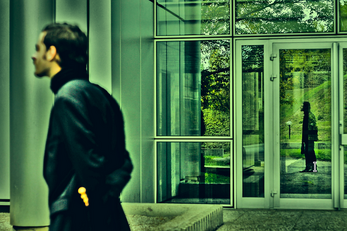